The Best Charcuterie Board Meats To Use This Spring 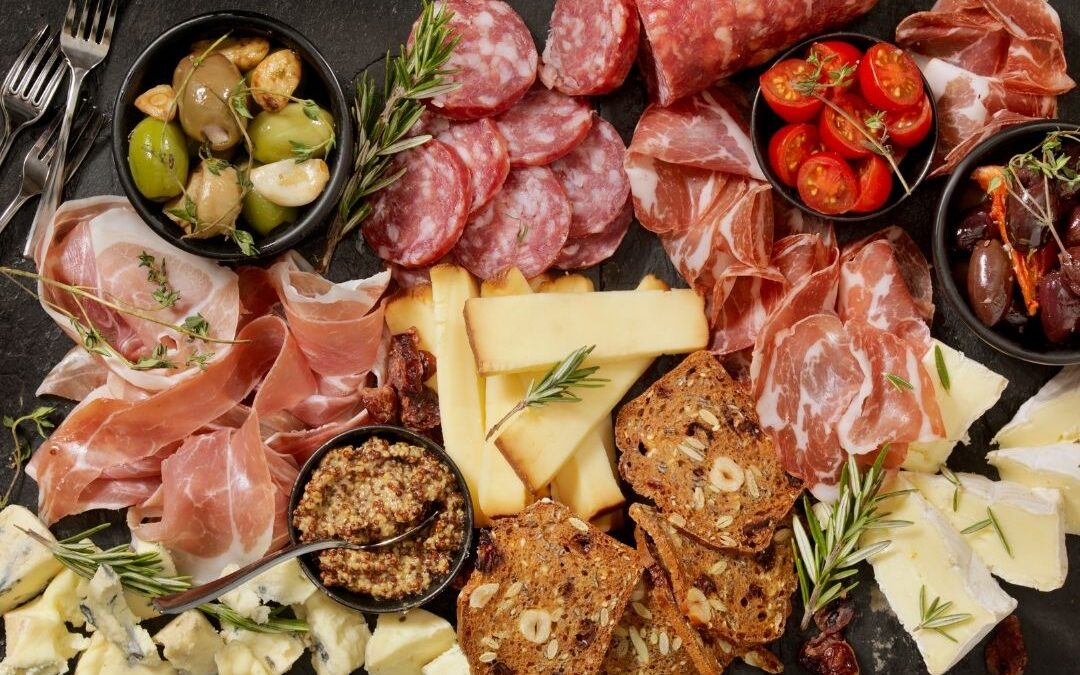 Of course, one of the best things about charcuterie is that it is for all seasons. While some specialty foods and dishes are traditionally tied to a particular season or holiday (think turkey and stuffing) charcuterie board meats are a fitting addition to gatherings in any season.

And part of the fun is to spruce up your board with seasonal items such as apricots and green beans in the spring, for example.

However, a fair question to ask at this point is, “What is a charcuterie board?”

Charcuterie is Much More than a “Meat and Cheese Platter”

Most of us are quite familiar the cheese platter, or cheese and cracker platter, or as the French might say, un plateau de fromage.

However, this particular arrangement is not to be confused with a charcuterie board, even if there are some cured meat selections included on the cheese plate. In fact, it is thanks to the French, by the way, that we have such a wonderful concept and term as charcuterie.

The original meaning of the word, according to one source, has origins reaching as far back as 15th century France. Literally translated, it means the products of a fancy pork butcher.

Today, most modern charcuterie does often include pork, but the definition has widened to reflect a dish served throughout many cultures. For example, in America it is not uncommon to include a bit of varied non-meat items such as imported cheeses. And many charcuterie boards can have additional ingredients such as:

Another approach that is often seen in locales like Napa Valley is the combination of classic cured meats and vegetarian or vegan items. What helps makes this even more appealing to a mixed group of guests is that you can easily include vegan cheese products along with vegan sausages, for example.

Making your charcuterie board reflective of the spring season can be easily achieved by focusing on copious amounts of typical California spring produce such as:

Cured Meats: The Heart and Soul of Charcuterie We would, of course, be remiss if we didn’t take a moment to consider the delicious possibilities for charcuterie board meats.

Opinions and recommendations on the best charcuteries meats vary as widely as personal tastes and palates. While you can never go wrong with highlighting the classic cured meats, there is always room for culinary innovation, so to speak.

And what comprises “classic” or traditional charcuterie?

One source has noted that a traditional charcuterie platter Includes French dry cured meats and offal meats, as well as Italian dry cured meat. Interestingly, while the concept is largely French in origin, it seems that – over time anyway – Italian meats became the main ingredients of the charcuterie board.

A list of classic charcuterie meats comes from a food blogger at Foodness Gracious. He offers up his five favorite that include,

Of course, there are many other dried and cured meats available that can be used for your unique charcuterie board this spring – and they need not all come from Italy!

The Wide World of Cured Meats and Charcuterie

While it may go by different names and somewhat different presentations in other countries, the spirit of the charcuterie is alive and well the world over.

In Spain, for example, cured meats are an ancient tradition similar to that in Italy. The regions of Spain are known for a variety of cured meat products such as a cured ham known as Jamón, several varieties of chorizo made from semi-fatty pork, smoked paprika, and salt, as well as Lomo, a cured pork tenderloin.

Some lesser-known cured meats in the United States that originate in Europe include Suho Meso, a Bosnian specialty made by salting, drying, and smoking beef over oak fire. From Dalmatia and Istria, regions found in modern-day Croatia and Slovenia, come varieties of a cured, smoked, and dried ham known as Pršut.

And not to get too esoteric, there is the File Elena, a dried raw meat product made from chilled or frozen pork tenderloin. The name refers to the city of Elena in northern Bulgaria. As one site points out,

“The fillets, locally called ribitsa, are salted and dried in a controlled environment suitable for natural microflora to develop and provide the meat with its typical aroma.”

While some of these meats may be difficult to source for your weekend get-together charcuterie board meats, there are plenty of other more accessible alternatives available at your favorite grocery store, like Cal Mart.

When in doubt, Italy is always a plentiful source to turn to!

Among the mouth-watering styles and varieties of Italian cured meats there are somewhat lesser-known types such as:

However, since you ideally want to limit your charcuterie board meats to just five selections, this might mean that you will need to plan several get-together or gatherings of friends so you can create different boards each time!

Visiting Cal Mart for Your Charcuterie Board Meats This Spring You can easily find Cal Mart in the heart of Calistoga, California,

Located between Hwy 128 and the wine country’s Silverado Trail, Calistoga is at the top of Napa Valley and is a conveniently easy-to-find stop for locals and travelers.

Cal Mart has provided a unique, enjoyable, and memorable shopping experience as a family-owned and independent grocery store for our customers for over five decades. And it is that experience we offer that is a big part of why we are known as “Napa Valley’s Finest Grocery.”

And our Cal Mart deli is where you’ll find a vast selection of gourmet, specialty, and hard-to-find meat products.

And Cal Mart’s employees are understandably proud of our large variety and wide selection of products, including delicious meats from around the world and from our own local purveyors.

We also have a superb selection of gourmet cheeses made from goat milk, sheep milk, cow’s milk, and mixtures. Add to that our always fresh produce including local vegetables, fruits, and several types of other local products, we can help you complete your charcuterie board creation.

Of course, you will want to pair your meats and cheeses with some fine wines or even a few local craft beers, as well.

And while you’re here, please feel free to talk with our knowledgeable staff and then treat yourself to a cup of coffee or tea from our Coffee Bar.

At Cal Mart, you will always find something that is unexpected, unusual, and uncommon!